Do You Know What This Means or Stands For? 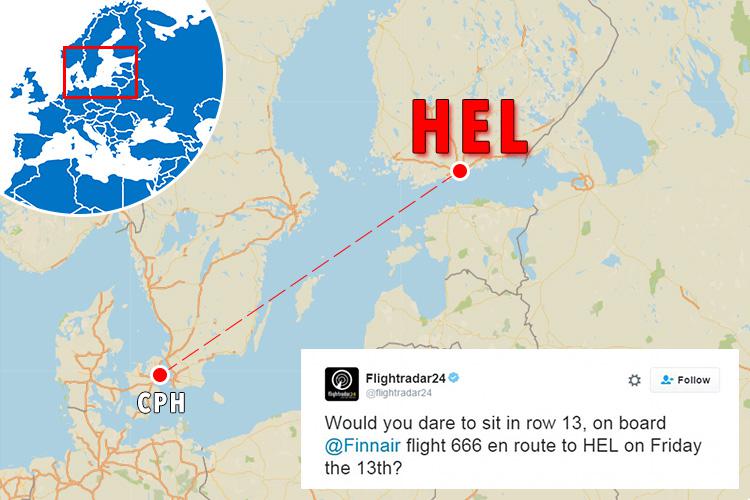 You may have seen in the news about the about a flight 666 heading to HEL & it happened to be today which is Friday the 13th.

People can get pretty superstitious about Friday the 13th. And the number 666. And with air travel in general.

It’s funny to see people get superstitious. Or even take interest in 666 or Hell. Why? Because you tell these people about Jesus, Heaven, Hell and so on and they ignore you or even bash you. Well many people joke about using 666 or Hell in many ways. But truthfully, it’s real & legit. Where does Hell or 666 come from? The Bible, God made it & said it. Hell is a place, go read what your first 6 days in Hell will be like: https://116boyz.com/2012/11/04/your-first-6-days-in-hell/

11 Then I saw another beast coming up out of the earth, and he had two horns like a lamb and spoke like a dragon. 12 And he exercises all the authority of the first beast in his presence, and causes the earth and those who dwell in it to worship the first beast, whose deadly wound was healed. 13 He performs great signs, so that he even makes fire come down from heaven on the earth in the sight of men. 14 And he deceives those who dwell on the earth by those signs which he was granted to do in the sight of the beast, telling those who dwell on the earth to make an image to the beast who was wounded by the sword and lived. 15 He was granted power to give breath to the image of the beast, that the image of the beast should both speak and cause as many as would not worship the image of the beast to be killed. 16 He causes all, both small and great, rich and poor, free and slave, to receive a mark on their right hand or on their foreheads, 17 and that no one may buy or sell except one who has the mark or[f] the name of the beast, or the number of his name.

18 Here is wisdom. Let him who has understanding calculate the number of the beast, for it is the number of a man: His number is 666.

& For Friday the 13th: Friday the 13th is considered an unlucky day in Western superstition. It occurs when the 13th day of the month in the Gregorian calendar (The Gregorian calendar is internationally the most widely used civil calendar. It is named after Pope Gregory XIII, who introduced it in October 1582.) falls on a Friday. It occurs at least once every year, and up to three times a year.

But did you notice Revelation 13 is where you find about what 666 means. Also what the number 13 represents:  At Jesus Christ’s last supper, there were 13 people around the table, counting Christ and the twelve apostles. In the Jewish culture, 13 signifies the age at which a boy matures.

So if you are reading this, and you are not fireproof, which means, you must be born-again to enter to the kingdom of God (Heaven) If you are born-again, you are fireproof. If you die without Jesus you will burn in Hell forever. But you don’t have to! Repent of your sins, ask Jesus to come into your heart. Contact us so we can help guide you in the right direction. Jesus bless you!